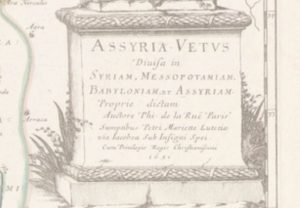 The Czech Institute of Egyptology, CUFA, cordially invites you to a lecture by Dr Seth F. C. Richardson (University of Chicago) which will be held on 16 June at 2 p.m. in Room C419 in Celetná 20, Prague 1.

Seth Richardson is a historian of the Ancient Near East who works in several different areas of ancient history. His work on the history of Mesopotamia’s Old Babylonian period (ca. 2000-1600 B.C.) includes publications of cuneiform texts from the end of the period, and studies of political-economic questions about institutions, warfare, and prosopography. He also works on problems of violence, including its role in the rise of the ancient state, changing conceptions of the body, violations against individuals, rebellion, and social histories of the ancient military. His third area of work is as a generalist-comparativist, working on problems as diverse as liver divination, icons and iconicity, ancestor cult, and changing ancient conceptions of the past. He has been a Research Associate at the Oriental Institute and the Managing Editor of the Journal of Near Eastern Studies since 2011. Prior to this, he was Assistant Professor of Ancient Near Eastern History at the University of Chicago since 2003, having earned his Ph.D. at Columbia University in 2002.

Abstract: This talk is really four talks in one – first as an introduction to the speaker’s recent work on different subjects. The presentation will include a study of didactic instructions from 3rd millennium Sumerian literature on “how to be a good citizen,” from a time when the state was still new; a look at the hidden economic function of slaves as credit instruments in 2nd millennium Babylonia; and a surprising transformation in concepts of distance in 1st millennium Assyria. But it is a fourth theme which frames the first three: a consideration of what it means to work as a generalist in disciplines and professions defined by specialization. What could critical, comparative, and speculative modes of generalist ancient-history work look like? What are the implications of generalism for specialization? Can we re-build a viable path towards a robust Humanities tradition in Ancient Near Eastern fields, and how? (And should we?)

The lecture is supported by the project Charles University Grant Agency P401/12/G168 History and Interpretation of the Bible. 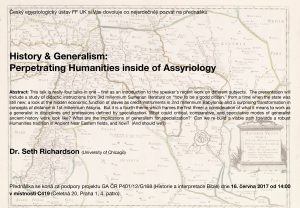