Dusk and Dawn: new monograph about literature between two centuries 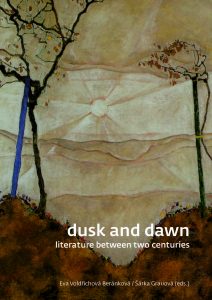 The new monograph Dusk and Dawn. Literature between two centuries, authored by an interdisciplinary team of philologists from the Faculty of Arts, Charles University, and their European colleagues, examines European and American literature from the turn of the nineteenth and twentieth century, tracing not only trends shared by the whole cultural region but also differences manifested in particular national literatures. The book is divided into two parts: the first one explores the transformation of paradigms in literature and literary criticism; the second one offers portraits of individual writers, figures and myths from the period broadly understood as the „epoch of Symbolism“.

The book argues that despite local differences, Euro-American literatures faced a common set of problems, including the crisis of modern culture, the confutation of Positivism, the relativisation of art forms and genres, and the problematisation of the subject. The book contributes to a re-evaluation of this period and to a greater awareness of its significance for the self-reflection and possible renaissance of modern culture. Major topics of the book include Symbolism, Modernity, Belle Époque, Verism, Pessimism, hybrid genres, and topology. Specialized chapters are dedicated to the works of D’Annunzio, Émile Zola, Knut Hamsun and Georg Brandes, Thomas Mann and Hugo von Hofmanstahl, Marcel Proust, and Edward Thomas. Contributors include Vladimír Svatoň, Eva Kalivodová, Václav Jamek, Alice Flemrová, Anna Housková, Catherine Ébert-Zeminová, Justin Quinn, Jiří Pelán, and Záviš Šuman.