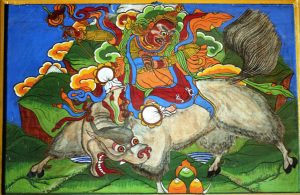 Amdo, one of the three main Tibetan regions, comprises the northeastern sector of the Tibetan Plateau. Amdo mainly falls within the current Chinese administrative unit of Qinghai Province, the majority of which is composed of Tibetan Autonomous Prefectures. Parts of Amdo are also located in the current Sichuan and Gansu Provinces. Premodern Amdo was characterized by high ethnic diversity, unique cultural aspects, and its own major dialect of oral Tibetan. Since the 1950s, modern Amdo Tibetans have experienced large-scale transformations in social, socio-economic and cultural aspects of life, primarily driven by Chinese state development efforts. Amdo’s position in China’s far West makes it a target for state programs for rural development. Additionally, the most important rivers of China all have their sources on the Amdo-Qinghai Plateau, making the region of special environmental interest for the state. During the past two decades, the number of researchers working in Amdo has gradually increased, yet information about individual or group projects and networking between researchers has remained underdeveloped.

The Amdo Research Network was established to connect national and international scholars and other interested parties who share common research interests in this region. Its aim is to serve as a platform for exchange and comparison of research project information and published results, and to facilitate easier establishment of research collaborations. The Amdo Research Network is based at the Humboldt University of Berlin, within the Tibetan Studies program of the Central-Asian Seminar, which has a strong focus on the Amdo area in terms of formal language training, teaching and affiliated researchers.

(For the Humboldt University website see AMDO RESEARCH NETWORK, the program of the Berlin workshop is here)

Please, contact us with any question using the following e-mail: amdoworkshop2017@outlook.com.