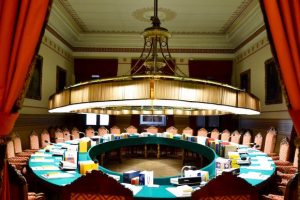 The Spanish Royal Academy (Real Academia Española, RAE) was founded in Madrid in 1713. According to its statutes, its main aim is to take care of the unity of Spanish, for the language is spoken in a vast area and changes in the individual varieties could threaten its integrity. The Academy cooperates closely with the national academies of other countries where Spanish is spoken, and in 1951, the Association of Academies of Spanish Language (Asociación de Academias de la Lengua Española) was established

Currently, there are three categories of membership: regular members (académicos de número), correspondents, and honorary members. The category of correspondents has been in existence since 1859. The election of a new correspondent via secret ballot is an expression of high esteem, reserved for experts working on topics related to Spanish language and literature. The correspondents (Spanish, Latin American, and international) take part in the activities of the institution, work on tasks assigned by the Royal Academy, and can participate in its meetings which deal with linguistic and literary questions. Doc. Petr Čermák, a member of the Department of Romance Studies at the Faculty of Arts, was appointed correspondent of the Royal Academy on 23 June 2016.