Professor Hilský to Receive the Most Prestigious Czech Research Award The Faculty of Arts is delighted to announce that Martin Hilský, professor of English literature and renowned Shakespearean scholar, has been awarded the prestigious National Award Česká hlava 2015 for his outstanding, sustained contribution to Czech research. Since 2002, the National Award Česká hlava, dubbed the „Czech Nobel Prize“, recognizes seminal contributions to research & innovation. The previous recipients of the award include the chemist Antonín Holý, the historian František Šmahel, and the oncologists Josef Koutecký and Pavel Klener. Further information, including details of past winners can be found on the Česká hlava website.

On Monday 12 October 2015, the government of the Czech Republic ratified the proposition by the Committee for Research, Development, and Innovation, and decided that Professor Hilský shall receive the award.

Mirjam Fried, the dean of the Faculty of Arts, pointed out that “Professor Hilský is a scholar of international stature. The Faculty of Arts is immensely proud that he is not only a FA alumnus, but that he decided to link his whole professional career with the Faculty. He was the Head of the Department of English and American Studies for a number of years, and under his leadership, the department became a prestigious European centre for English and American studies. In spite of all his remarkable achievements, he is known among his students and colleagues as an extraordinary gentleman, and kind and wise teacher. 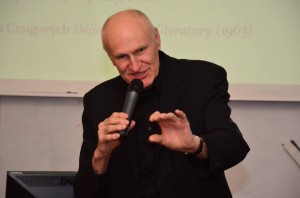 Prof. PhDr. Martin Hilský, CSc., dr. h. c., MBE (1943) is professor of English Literature at the Department of Anglophone Literatures and Cultures and one of the most prominent translators of Shakespeare‘s plays and poems into Czech. He is a recipient of the prestigious Jungmann Prize for his Czech rendering of Shakespeare’s Sonnets (1997), in 2002 he was awarded the Tom Stoppard Prize for his essays on Shakespeare, and an MBE (An Honorary Member of the British Empire) by Her Majesty the Queen Elizabeth II. for his lifelong achievement as translator, writer and teacher. In 2012, he was awarded two prestigious awards – the State Award for Translation and the President’s Medal of Merit.

His publications include Současný britský román (Contemporary British Fiction, 1991) and a book-length study of modernist writing in Britain Modernisté (The Modernists, 1995). He is editor and co-author of a book of essays on contemporary American literature Od Poea k postmodernismu (From Poe to Postmodernism, 1993) and on English modern literature Od slavíka k papouškovi (Nightingales and Parrots, 2003). In 2008, Když ticho mluví (When Silence Speaks), a dialogue about literature came out. He is the author of a collection of essays on English and American literature, Rozbité zrcadlo (A Broken Mirror, 2009). He has also written more than 60 essays on British and American literature and more than 30 essays on Shakespeare. Martin Hilský has translated Shakespeare’s complete works: 38 plays, The Sonnets (1997), and the poems Venus and Adonis (2008), The Rape of Lucrece, The Turtle and the Phoenix, and A Lover´s Complaint (2009). He is the editor of a widely acclaimed dual-language critical edition of Shakespeare’s plays and poems. The complete dramatic works of Shakespeare in his translation have been published by the European Literary Club (Evropský literární klub, 1999-2009). He is the author of a collection of essays Shakespeare a jeviště svět (2010). His formidable and unique Shakespeare translation project was crowned in 2011, when William Shakespeare: Dílo – the first complete works in Czech by one translator – was published by Academia. A year later, in 2012,Slovník citátů z díla Williama Shakespeara (A Dictionary of Shakespeare Quotations) followed.

His non-Shakespearean drama translations include Thornton Wilder’s Our Town (1978), Peter Shaffer’s Amadeus (1981), James Goldman’s Lion in Winter (1988), J.M. Synge’s The Playboy of the Western World (1996), Peter Barnes’s Red Noses (1991). He has translated books by R. Lardner, J. Steinbeck, J.G. Farrell, D.H. Lawrence, T.S. Eliot and others. He has been invited to give lectures at many universities and venues in the Czech Republic and abroad, e.g. University of Warwick (1991), University of East Anglia, Norwich (1991), University of London (1992), Birkbeck College, London (1992), Penn State University, Pennsylvania (1994), Folger Library, Washington D.C. (1995), Synge Summer School, Rathdrum, Ireland (1997), Deutsche Shakespeare Gesellschaft, Weimar (1999), University of Murcia (1999), Shakespeare Institute, Stratford-upon- Avon (1994, 2000, 2002). He is a member of the Czech Modern Language Association (chairman 1993-1996), the European Society for the Study of English (ESSE) and the Czech branch of the PEN Club. He is well known as an author, translator and performer at the Czech Radio 3, Vltava, Czech Television and many theatres in and outside Prague.