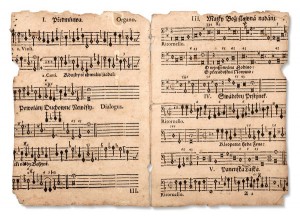 The printed edition of New York Times has informed about the discovery of the missing ritornellos from “The Czech Lute” by Adam Michna, one of the great works of the Czech Baroque, in the Franciscan library in Slaný. The discovery was made by doc. Petr Daněk from the Department of Musicology. The author of the article, Professor Michael Beckerman from New York University, hails the discovery as phenomenal and considers it one of the most significant musical discoveries of our time. He also praises Petr Daněk’s book about music print in the Czech Lands, which will also be published in English.