International conference on the poet and translator Jan Zábrana 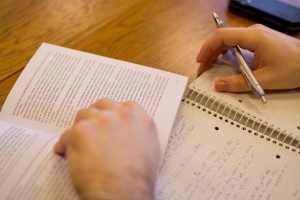 On 6 and 7 November, the international conference Jan Zábrana – Poet – Translator – Reader will be held at the Department of Translation Studies, Faculty of Arts. The conference will focus on three major areas of Zábrana’s work: his own poetry and fiction, translations of modern English, American, Russian, French and Spanish literature, and finally his literary journalism where Zábrana introduced his authors to the public. The event seeks to emphasize the links between these three areas as a necessary component of current approaches to Zábrana.

The conference programme will be accompanied by workshops for translators where the participants will have a unique opportunity to experience Zábrana in the process ot translation under the supervision of foreign lecturers in Czech studies and local experts.

We have asked Dr Eva Kalivodová, one of the organisers, a couple of questions about the conference.

Why have you decided to focus on Jan Zábrana?

Zábrana was a unique creative personality. Our Department, which focuses on translation in different forms and contexts, feels obliged to explore Zábrana’s works in its fascinating complexity. Zábrana is usually perceived as a major poet, and his translations from English and Russian are mentioned only marginally. In some specific cases, the value of his literary translations of individual authors is examined by scholars.

This conference is, however, mostly interested in the relationships between Zábrana’s own poetry and fiction and his translations. After 1968, the translations de facto become the only possible fulfillment (in terms of publication) of his creative urge. The importance of his selection of author gains momentum – thanks to his wife, Marie Zábranová, who cooperates with us, we know for sure that he himself selected the authors he translated. His literary criticism, journalism and translations for the magazine Světová literatura and in anthologies are revealing, surprising and still valid contributions to the Czech literary awareness and they transform the traditional notion of the culturally stale Normalization period.

Just to mention some examples: Zábrana’s discovery of Ezra Pound, of his American poetical rehabilitation and its links to the Beatniks, was, in ideological terms, most „inopportune“ at that time. He also very naturally introduced some „female“ elements into the Czech cultural environment by his translations of Sylvia Plath or the Beatnik Diane di Prima.

Moreover, Zábrana was not only the author and translator of „high“ poetry – he found great creative delight in detective fiction, which he wrote and translated, and also to an extent in the horror genre. He was of course connected with Josef Škvorecký in this respect, but the conference would like to enhance this aspect of his career.

How well-known is Jan Zábrana abroad?

Outside the Czech Republic, Zábrana is known mostly through his diaries, which were published in Czech twice as Celý život (1992, 2001), as a writer who subjectively bears witness to the crushing pressure of the totalitarian regime on the creative individual. Selections from his diaries have been published in French, Spanish, Italian, Portuguese, Danish, and Ukrainian. Zábrana’s poetry is less well-known. But there have been interesting developments in this respect – Justin Quinn has been translating Zábrana’s poetry into English. Doc. Quinn will supervise the English translation workshop at the conference.

We hope that the conference will bring more international recognition to Zábrana’s difficult and invaluable role in intercultural communication in a period which was not at all favourable to such undertakings. We are looking forward to lectures by the Russian expert in Czech studies, Professor Skorvid, and by professor Heftrich from Germany. We also believe that the conference will highlight the fact that Zábrana was, as a translator, interested in French and Spanish literatures too.

What level of preliminary expertise do you expect in those who would like to participate?

A basic interest in historical and current possibilities of literature and culture is a sufficient „passport“. Zábrana was a unique personality who strove to awaken the thought and imagination of his readers. We still need similar personalities today in relation to the contemporary world.

How do you plan to organize the translation workshops?

The translation workshops should be a living process of translating Zábrana’s images and thoughts in all the languages taught at the Department of Translation Studies – English, Russian, French, Spanish and German. The organizers, in cooperation with foreign experts who have a great interest in the subject and experience as translators, will discuss possible solutions for translating selected Zábrana’s texts (poems, short stories, extracts from diaries) with the participants. These texts are available for download at the conference website and it is necessary that the participants submit their tentative translations in advance, so that there would be a topic for discussion. We hope that we will publish the results in some form. The participants will receive a letter of confirmation that they took part in this unique workshop.

What else should the participants look forward to?

The conference programme includes panel discussions, and on Friday evening, the student club Celetná will host a concert by Jakub Kříž who has set Zábrana’s poems to music as „Vraní Zpěvy“ (Crow Songs). 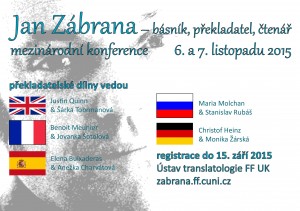