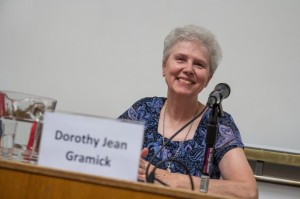 Sister Jeannine Gramick has been, since 1970s, helping members of the LGBT community in the United States who do not want to give up their place in the Church. She has co-founded the movement New Ways Ministry in Maryland, her native country. She is an advocate of marriage rights for all people. A lecture on the issue of bullying, which is unfortunately still very topical in the Church, was followed by open discussion.

The event was held on August 12, 2015 at the Faculty of Arts. Both the lecture and the discussion were interpreted into Czech consecutively.

The discussion was organised by the society Logos CR as part of the Prague Pride festival 2015.

The whole video recording is available on Youtube on the Faculty of Arts‘ channel.