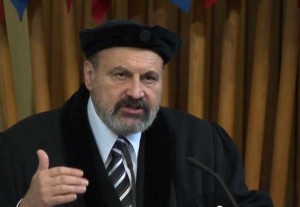 On 8 December 2014, the Great Hall of the Carolinum hosted a ceremony featuring two winners of the Templeton Prize, co-organized by Charles University and the John Templeton Foundation.

Special lectures were then given by Professor Charles Taylor and Professor Tomáš Halík, winners of the Templeton Prize in 2007 and 2014 respectively.

A video recording of the event is available at Charles University´s YouTube Channel.