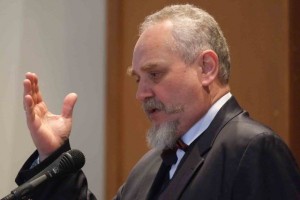 Professor Zubov´s appearance at the CU FA was part of his visit to Prague as a guest of this year´s Forum 2000 (12-15 October 2014). The lecture was followed by a discussion with the audience and the presentation of the Czech translation of Russia´s 20th Century History, Volume I. The presentation was attended by another of the book´s authors and by one of its translators.

The recording of the lecture is available at the CU FA YouTube Channel.

The event was co-organized by New Media Studies of the CU FA, the publishing house Argo, and the External Relations Office CU FA, and was held under the auspices of the Faculty Dean, doc. Mirjam Friedová.

Born in 1952, Professor Andrei Borisovich Zubov is a leading scholar and activist: in spring 2014, he was dismissed from the Moscow State Institute of International Relations, having written publicly against President Putin´s annexation of Crimea.