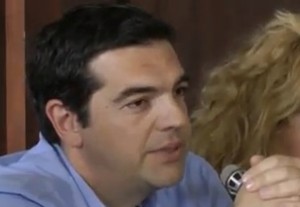 The situation in Greece continues to be difficult. On the one hand, the government coalitions have implemented extensive cuts in public spending since 2010, responding to pressure from the Troika (the European Commission, the European Central Bank and the International Monetary Fund). On the other hand, part of the Greek public has been very loud in its opposition against these measures, resulting in an unprecedented support for the party SYRIZA. This party will take part in the upcoming EU elections. What is its position on further austerity measures? What is its idea of the development of the eurozone? How should the EU as a whole respond to the economic crisis? These and other questions were answered by the leader of SYRIZA, Alexis Tsipras.